How can one Make use of Palm Oil Mill Effluent (POME)?

Palm Oil Mill Effluent (POME) means highly polluting waste-water which is usually discarded in disposal ponds, leading to the leaching of contaminants that pollute the groundwater and soil, and in the discharge of methane gas into the atmosphere, is from Palm Oil processing. POME is an oily wastewater generated by palm oil processing mills and contains various suspended components. This liquid waste mixed with the wastes from steriliser condensate and cooling water is called palm oil mill effluent (POME). On average, a standard palm oil mill generate about 1 tonne of liquid waste with biochemical oxygen demand (BOD) 27 kg, chemical oxygen demand (COD) 62 kg, suspended solids (SS) 35 kg and oil and grease 6 kg for each and every ton of FFB (fresh fruit bunches) processed.

You can find very high Biochemical Oxygen Demand (BOD) and Chemical Oxygen Demand (COD), which is 100 times over the municipal sewage in POME. As no chemical is added during the oil extraction process POME is a non-toxic waste, but because of organic and nutrient contents, it will pose environmental issues due to large oxygen depleting capability in aquatic system. The high organic matter is due to the presence of different sugars for example arabinose, xylose, glucose, galactose and manose. The oil-bearing cellulosic materials from the fruits are the main suspended solids in the POME. Since the POME is non-toxic as no chemical is added in the oil extraction process, it is a good source of nutrients for microorganisms. 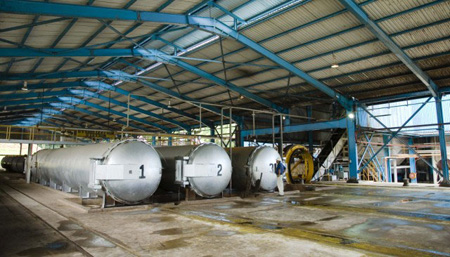 At this point, it is a new approach in managing POME to recover the renewable organic-based product. The technology is aimed to recover by-products for example volatile fatty acid, biogas and poly-hydroxyalkanoates to promote sustainability of the palm oil industry. Furthermore, it is envisaged that POME could be sustainably reused as a fermentation substrate in production of numerous metabolites through biotechnological advances. In addition, POME involves high organic acids and is suitable to be used as a carbon source.

This entry was posted in Oil Mill Maintenance. Bookmark the permalink.